I’m not a big fan of using technology just for the sake of it. We used to have a wireless battery-powered door bell, but it was unreliable: once, a heavy-handed delivery driver pushed in the rubber button so far that it got stuck under the case. Then every caller for a week after that just pressed it anyway, and assumed it was working and that the lack of sound must be because the buzzer couldn’t be heard from outside the house. So I replaced it with a ship bell, which has the advantage of providing instant ear-splitting feedback to the user as to whether it is working or not. It has had 100% uptime over several years of operation.

So it is with dismay that I observe the trend towards push-button or touch controls on everything. My wife needs a dimmable bedside lamp: bright enough to help her breastfeed in bed at night, but not so bright so as to interfere with sleeping. I went shopping and found a wide variety of inappropriate designs. For example, some have only a single button and need to be cycled through the brightest setting in order to turn them off. How can a designer make such a thing and still take pride in their work? I know potentiometers are expensive, costing $1 or so, but even at the top end of the market, with lamps costing $200, the best they can do is put half a dozen touch switches on them, giving you bidirectional control over brightness and cycling through colour temperature settings. But they are still harder to use than an old-fashioned knob, and with an inappropriate minimum brightness for my application.

So I made my own.

Hazel threw an LED torch down the stairs and broke it. Angela asked me to fix it. Well, it only cost $4 from the Reject Shop in the first place, so my repairs weren’t very careful. I opened up the aluminium case lengthwise with a Dremel cut-off wheel and found the problem — the circuit board had been soldered to the case, and that solder joint had broken. Oh well, every failure is an opportunity, right?

For days, as I walked around the house, I looked at every item for its potential as a lamp. Eventually I settled on the acrylic case for an old iPod Shuffle. I put the iPod itself in the bin. 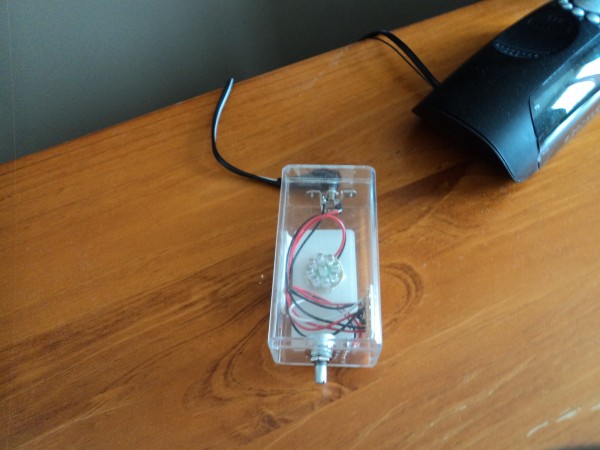 It provides indirect lighting: the upward-facing LEDs put a spot on the ceiling, lighting up the room without excessive glare for people lying in bed.

All items were from my stock or salvaged.

To dim an LED with a potentiometer, you need to control the current rather than the voltage. If you control the voltage, then you’ll get nothing at all until it reaches a certain threshold, and then the brightness will rise exponentially until something overheats. So I adapted a simple voltage-controlled current source from Horowitz & Hill (2nd edition) to provide roughly linear current control as you turn the knob. Biasing the lower end with a diode brings the zero current point to approximately the zero position of the potentiometer. In practice, at the lowest setting, there is a very slight glow from the LED array which is only visible in a very dark room. I’ll call that a feature, to help you find the knob at night.

Update: A friend asked me about battery power. The torch the LED array came from used 3 AAA batteries, so about 4.5V, but with this inefficient current source the supply voltage needs to be doubled, since at full brightness, the voltage drop across the resistor R2 is as much as across the LED. And even if you used a current source that could go from rail to rail, you would still waste up to half the power.

A better solution is to power it from its original 4.5V, but with PWM. No doubt something could be cooked up with 555 timers, but they’re not really my style, I don’t have them in stock. I do have microcontrollers, and a microcontroller solution for this would have some nice advantages.

So I would use an ATtiny44, with a circuit very similar to my season clock (which, by the way, is still running on its original AA batteries, almost 3 years later). I would measure the potentiometer voltage with the microcontroller’s ADC, and when it drops below a certain voltage, go into sleep mode, waking say once every 100ms. I would power the potentiometer from a digital output, saving 450µA in sleep mode, just turning it on long enough to measure it. Maximum DC output for this chip is 40mA, so an outboard transistor may be needed, depending on choice of the LED array.