I just bought a NAS, specifically a Thecus N2200EVO, to do LAN music streaming and some other miscellaneous storage tasks at home. I was just on the verge of disappointment at a few minor niggles, when I discovered the SSH interface.

It lets you log in as root. It’s Linux on ARM. All the partitions are writable, and /etc appears to be mounted on a persistent storage device. The web interface is written in PHP. Within a few minutes, I had hacked out the annoying Flash login page, now it is replaced by an HTML fallback (at least until the next reboot).

The startup process is implemented in shell script, with explanatory comments by people called Astro, Michelle and Angus. It uses SQLite for configuration storage, in addition to plain files.

I understand from a quick bit of web surfing that it is trivial to write your own “module”, which can contain modifications to the PHP web interface, arbitrary cross-compiled binaries, etc. Modules can be installed via the admin interface and are stored on the attached hard drives.

It’s hard to imagine a consumer device offering an easier path to customisation for a LAMP developer like me.

I thought I’d stop by my blog to rant about a little GTK+ issue that has come up recently.

GTK+ is known for its thoughtful design. For example, when you open a file chooser dialog box to open or save a file, the directory it initially displays is the last directory you used.

Or at least, that’s what it used to do. The relevant code was deleted last July by the well-known GNOME developer Federico Mena Quintero, in GTK+ versions 2 and 3. In its place, you get the “recently used” list.

I guess you haven't opened any schematics lately

I don’t know about you, but usually the files I want to open are not the ones I have not recently used. If I opened a source file recently, it would probably still be open in my text editor. And if I want to send an email attachment, the file I send is usually a different one each time, not the same file over and over again.

Files tend to be grouped into directories. If you open a file in a directory, it’s fair to assume that when you click “open” again, you want to open a different file in the same directory, not the exact same file you just opened. In most apps, this workflow will still be possible because the app calls gtk_file_chooser_set_filename() to set the current filename to be equal to the last one that was opened, and in this case, the relevant directory is used.

However, in some apps there is no filename or directory set, and every click on the “open” button results in you going to a list of recently-opened files. From this list, there is no way to navigate to the directory of the last opened file apart from remembering where it was and following the whole hierarchy, or creating a bookmark. You might say that that’s the app’s fault, but it was never a problem in the past, because GTK+ had sensible behaviour by default which didn’t need to be overridden.

The behaviour of the “save” function is just as bad. Here’s a screenshot: 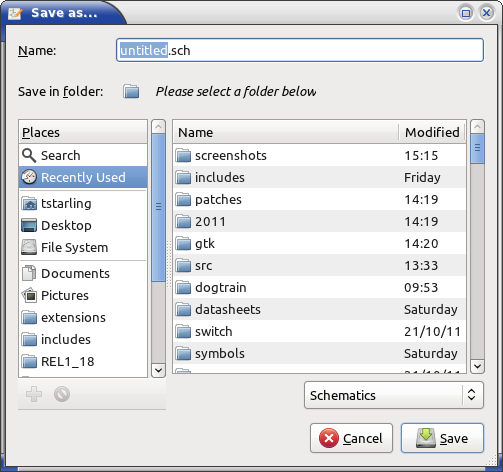 Here's a list of everything you've worked on in the past month in no apparent order. Where would you like to put this file?

Some have said that Xfce provides a refuge for people who don’t agree with the direction the Linux Desktop has taken, with the release of GNOME 3 and Unity. I switched to Xfce for that reason, but I’m not really finding it to be the safe refuge that I expected it to be. The developers who built GNOME 3 are also using libraries shared by both GNOME and Xfce as a platform for their questionable experiments in user experience.

Whenever the topic of viruses comes up on any tech-oriented public forum, we are often told by clueless commenters that Linux doesn’t have viruses because it is secure by design. When pressed, such people will talk of privilege separation in Linux. Sure, Windows has privilege separation too, and it has filesystem ACLs enabled by default, which allows fine-grained control, but this privilege separation is in inferior to that in Linux since it was only introduced in 1993, whereas Unix-like operating systems have supported the concept since the 1970’s.

Such commenters may be proud of the fact that they run Ubuntu in its default configuration, which does not allow root logins, but rather uses gksudo to pop up a box requesting your password before any action is taken as root. They never start a root shell, instead they prefix every privileged shell command with “sudo”.

There are two problems with this:

Of course, Linux viruses are not viruses in the 1990 sense of the word, they are worms exploiting things like weak SSH passwords and web apps with arbitrary shell execution vulnerabilities. But the things on Windows that we call viruses these days are very similar. The reason Linux viruses target servers instead of desktops is because there are more servers than desktops, and servers are high-value because they can send larger volumes of spam.

On the second point, if you don’t believe me, try this little experiment. In your favourite Ubuntu desktop, open a terminal window, and run the following shell command:

That will silently poll sudo until it is able to run a command without asking for a password. So while that is running, click System > Administration > Synaptic Package Manager (or any other command that runs as root), and type in your password when it prompts. The shell command will complete as soon as you hit OK.

It only logs to the syslog when it successfully runs the command as root, at which point you’re screwed anyway, since the command running as root could edit the logs.

You may have noticed that if you run sudo in one terminal window, you still need to enter your password again when you run it from another terminal window. This is because sudo stores a separate password timestamp for each pseudo-terminal. However, this mechanism is not any sort of secure, and you can easily trick sudo into thinking it is connected to any terminal to which the current user has read access. The redirections in the shell command above cause sudo to treat the terminal as “unknown”, which gives you access to the same password timestamp that is used for commands run from the desktop.

Alternatively, try this one:

Convincing, yes? The point is that a malicious application that runs from your main user account can easily gain root access, either by waiting for you to do some regular sysadmin task like updating your system, or by tricking you into thinking that it is a valid system component which is asking for your password.

All that remains, then, is to find some way, by vulnerability or social engineering, to run malicious code as the main desktop user. That’s really not that far from the situation in Windows.

The most significant security difference between Linux and Windows is popularity. Anyone using a Linux desktop for security reasons would do well to switch to FreeBSD or BeOS the moment Linux desktops becomes popular enough for virus writers to start targeting them.

[Update 2011-04-26: using PolicyKit‘s pkexec instead of sudo to authenticate sysadmin actions would address my primary concern here. But it would have to be used exclusively. As soon as you give sudo your password, you’re toast. Let’s hope the distros start heading in that direction.]

In the tradition of abusing high-level Linux tools to produce useful low-level data, I present a method for estimating peak memory usage in Linux by text-processing the output from strace:

This Perl script invokes an arbitrary command via strace. It adds up memory allocated by mmap2() with no location hint and the file handle set to -1, this is the way that malloc() typically allocates large amounts of memory. It also counts calls to brk(), and subtracts the sizes of munmap() calls for maps that were previously counted. It outputs the current memory usage rounded off to the nearest megabyte, whenever that number changes.

Other methods for measuring peak memory usage typically revolve around polling /proc for resident set size (RSS), this potentially misses short-lived allocations. The GNU time command (/usr/bin/time, not the one built in to bash) can show peak RSS, but in some applications this can be a vast overestimate of physical memory usage, due to the way Linux counts RSS.

My method provides a reasonable estimate of the amount of memory allocated with malloc(). That can be a useful thing to know.